Bible teaching with an emphasis on Israel, prophecy and the Jewish roots of Christianity
Series: “Much Like Peter”
On the shore of the Sea of Galilee, Yeshua began His ministry by calling disciples to follow Him. One of these was Peter — who often acted before thinking. Even so, the Messiah foresaw that this simple fisherman would become the leader of the Apostles and a powerful voice for the Gospel.

This series features teaching by Dr. Jeffrey Seif, reenactments by Israeli actors, David and Kirsten Hart singing songs by Zola on location in Israel, interviews with Israeli Believers, and modern life applications with the Harts. Each program reveals that many of us who follow the Lord are “much like Peter.”
Episodes:

2218 “Foundation of Faith”
From Bethsaida, by the beautiful Sea of Galilee, Dr. Jeffrey Seif recalls Yeshua/Jesus calling the disciples to follow Him. Peter, one of the Twelve, received a new mission and a new name.
2219 “Faith Requires Boldness”
During a storm, Peter was the only disciple to step out of the boat and walk on the water to Jesus. Faith prompts Believers to do daring things. And even when we fail, Jesus is there to help us continue following Him.
2220 “Who are You, Yeshua?”
Caesarea Philippi, a center of pagan worship, was a remarkable place for Jesus to reveal His Messiahship. Though darkness and brokenness may surround us, the Gospel message continues to advance, and even the forces of hell will not prevail against it.
2221 “Divine Apparently”
Standing with Jesus at the Transfiguration were Moses and Elijah, representing the Law and the Prophets. Peter, wanting to contribute, responded impulsively. Like us, Peter needed to pay attention and listen to the Lord’s words.
2222 “I Don’t Know Him”
After Judas betrayed the Messiah, Peter initially responded with violence, but later with denial. Like Peter, today’s Believers often experience a disconnect between our words and actions. Yet even in difficult circumstances, God’s grace is sufficient.
2223 “Do You Love Me?”
After the resurrected Savior met Peter and other disciples at the Sea of Galilee, they experienced revival. The miraculous catch of fish foreshadowed the Great Commission’s bountiful harvest. As Jesus did with Peter, He offers grace and forgiveness to all who follow Him.
2224 “Tongues of Fire”
Surprisingly, the disciple who denied knowing Jesus later preached the Gospel and 3,000 people were saved. Before being known as Pentecost, the feast was called Shavuot, the Jewish holy day.
2225 “Beyond Israel’s borders”
Limited understanding prevented the Apostles from sharing the Gospel globally, as the Lord intended. Yet Peter received a divine vision that prompted him to share the Gospel with gentiles.
2226 “Bonus interviews”
During this series, viewers have briefly heard from four Israelis who, like Peter, are followers of Yeshua. In this program, we learn more from our interviews with 1) Chaim Malespin, director of the Aliyah Return Center; 2) Daniel Carmel, captain of the “Jesus” boat on the Sea of Galilee; 3) Carolyn Hyde, who with her husband moved to Israel; and 4) Yuval Shlomovitch, the Israeli actor who portrays Peter in the series. 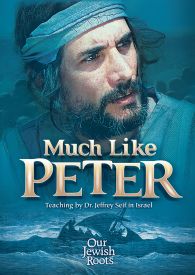